Skip to content
You are reading GoQuorum development version documentation and some displayed features may not be available in the stable release. You can switch to stable version using the version box at screen bottom.

Note: when running in Windows, -Dgeth.node=geth must be specified as Quorum is not yet available on Windows OS

Note: when running in Windows, -Dgeth.node=geth must be specified as Quorum is not yet available on Windows OS

There are a few ways in which you can run Cakeshop (see the sections below for details on each, as well as configuration page):

1. Default mode: Used when you want Cakeshop to start up an Ethereum node.

Running Cakeshop in the Default mode will start up Cakeshop and also start running a regular geth node (on a private/test network).

2. ‘Attach/Unmanaged’ mode: Used when you want to attach Cakeshop to an already running Ethereum-like node.

Running Cakeshop in ‘Attach’ a.k.a ‘unmanaged’ mode will initialize Cakeshop but not start it nor start any Ethereum node. Once Cakeshop initialization is complete you can configure it to use the RPC details of your running node . When you then start Cakeshop it will attach to your node.

3. Multi-Instance Set Up: Used when you want to run Cakeshop on more than one node in your network.

Cakeshop is currently designed such that a given instance of Cakeshop works directly with a single Ethereum-like node, however you can set up multiple instances of Cakeshop on the same machine (each which could either have been started in ‘Default’ mode or ‘Attach’ mode) such that each can talk to a different node.

Note: you can use the Attach mode and/or Multi-Instance setup configuration to run Cakeshop on GoQuorum nodes. See below for connecting Cakeshop to the 7nodes network from the quorum-examples repo.

The below commands assume you have renamed the WAR file to cakeshop.war

Although Cakeshop currently has a one-to-one mapping with the underlying Ethereum-like node that it connects to, it is possible to have multiple Cakeshop instances running on the same machine, each connecting to a different Ethereum-like node. The best way to achieve this is to create separate Cakeshop folders for each node and then attach to each separately. You should also configure the ContractRegistry address as per the below:

Cakeshop deploys a ContractRegistry contract upon start up that is used to track those contracts that have been deployed to the chain using Cakeshop or the Cakeshop APIs. When running a multi-instance setup, you’ll want to ensure that each instance of Cakeshop references the same ContractRegistry contract in order that each provides a consistent view within the Contracts Explorer.

There are two cmd flags that can be set to achieve this:

You can use the ‘Attach’ mode to use Cakeshop to explore the quorum-examples 7nodes network.

In all cases, Cakeshop will be running once you see the below image, which shows the Cakeshop build and url that you can access that instance of Cakeshop on: 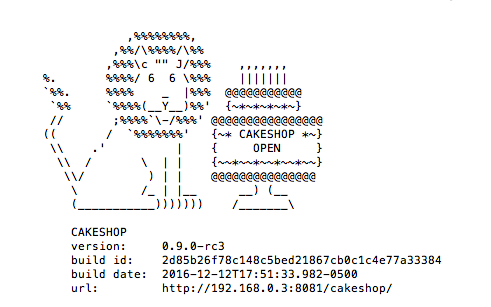 ConsenSys has acquired Quorum from J.P. Morgan. Please read the FAQ.
Questions or feedback? You can discuss issues and obtain free support on GoQuorum Slack channel.
For paid professional support by ConsenSys, contact us at quorum@consensys.net